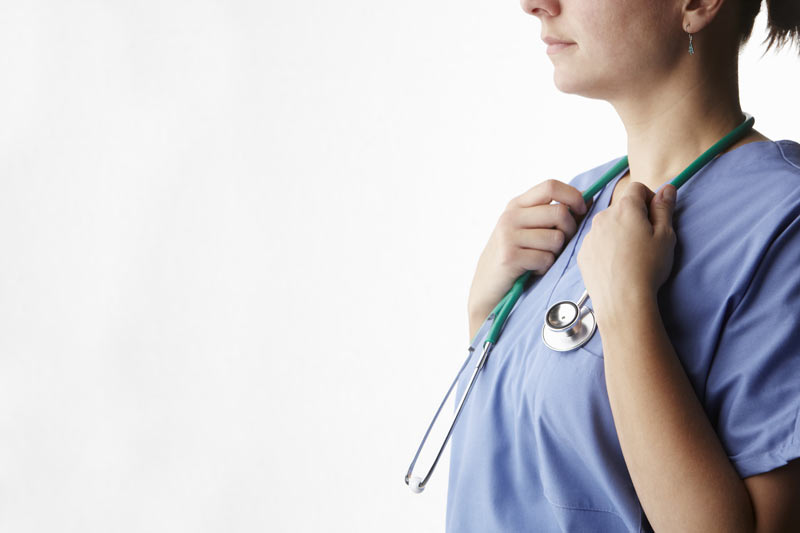 Whilst we may not have a handle on the exact numbers of assaults on lone workers, it is widely recognised that this group of NHS staff face significantly higher risk than non-lone workers as they do not have the immediate support of colleagues or others nearby.

The Security Incident Reporting System (SIRS) is used by NHS Protect NHS to report security incidents occurring on their premises to NHS Staff. According to SIRS the higher number of assaults reported to the police from lone workers is likely due to the severity of the incidents they experience. Of the 143 incidents that have required police intervention via the NHS Lone Worker Framework Agreement, 53 (37%) have involved physical assault on staff, with the majority of the remainder involving verbal aggression and threats of physical assault.

The proportion of lone workers sustaining injury from a physical assault is approximately 9% higher than for non-lone workers.

Below chart shows Physical assaults in 2013-14 by percentage resulting in injury for lone workers vs non lone workers. 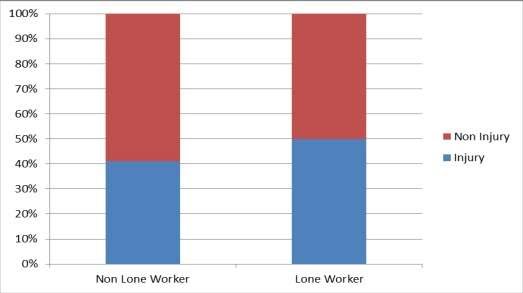 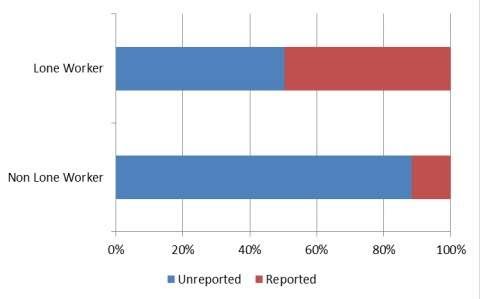 According to the lone worker estate mapping report one of the key challenges highlighted in the NHS report is the low usage of lone worker devices. The benefit of having lone worker devices supported by line managers is that this ensures usage is monitored and maintained, therefore improving the level of protection for each staff member. The challenge is to increase funding to further improve lone worker solutions for new and existing staff.

The report observes that the number of lone worker devices varies in each region. The North East and North West have 26.1% and 22.3% of devices respectively, while the remaining regions have between 6.5% and 11.1%. This suggests that large organisations in the North East and North West may have invested in numerous devices since they have twice the number of devices of any other region in England. The key ring fob personal alarm device is predominately popular in the South East region, and it accounts for 12.5% of devices overall.

Regarding types of personal alarms; ‘Alarm type devices’ follow closely, with about the same percentage in usage as training, mobile phones and management systems. Portable camera devices, mobile phones with alert apps and other systems are used less frequently.

The chart below is the Reported physical assaults on NHS staff statistics 2013-14, as well as data on lone worker coverage in each sector.

The acute and primary care sectors have similar numbers of assaults per 1000 staff, at 22-24. The ambulance sector has twice as many assaults per 1000 staff (50) and the mental health sector has over nine times as many (223). Lone worker systems are one way to reduce the risk of assault among lone workers, but the difference in assault figures indicates that the required degree of protection varies across sectors.

The report concludes that lone worker devices are the most popular option with 48-52% of organisations thinking to invest in them in the next two years, followed by training at 44-47%. Management systems and CCTV also feature in the top three with 30%, suggesting NHS organisations are thinking to invest in existing support mechanism and/or introduce new ones.
The RCN in their Personal safety when working alone: guidance for members working in health and social care strongly recommends that all members use safety equipment provided by their employers including lone worker alarms.

We are endorsed by